When the University of Illinois at Chicago hosted the Great Lakes Bioneers Conference a few months ago, I had the privilege of listening to Vandana Shiva, Ph.D., a leader in a global transformational movement defined in part by ecological balance, sustainability and innovation. I was honored to publish Linda Sechrist’s interview with her in our November issue.

According to Shiva, 75 percent of the biological devastation on the planet is caused by industrial agriculture, which destroys everything from water sources and area soils to people’s livelihoods. Invested interests assert that without widespread or even universal use of genetic crop modification and industrial agriculture, it’s impossible to grow enough food to feed the planet’s unprecedented population.

In contrast, Shiva highlights the statistics: 80 percent of the domestic food on the planet comes from small farms, while only 2 percent of that grown by large agribusinesses goes to human consumption—most of it becomes animal feed. Shiva’s touchstone message is a simple one: “The best way to grow well-being is to grow a garden.” She delights in the explosion of gardens in cities across our nation, as evidence of a grassroots change that will create truly living cities.

In this month’s feature article on Urban Gardening, John Ivanko and Lisa Kivirist report that more than 30 percent of U.S. households are now growing food for their families. Even apartment dwellers are finding creative ways to raise helpful quantities of produce on balconies, patios and rooftops. Our community spotlight traces Gretchen Mead’s transformational journey into becoming a supportive force for this movement locally, through the Victory Garden Initiative.

Last summer our family enthusiastically converted part of our lawn to a raised-bed vegetable garden with great expectations and still we were surprised. With the aid of nutrient-dense organic compost, we experienced such an abundance of produce that we happily gifted numerous bags of tomatoes, peppers and summer squash to friends, family and neighbors.

The venture made me realize that I have been among the majority of Americans that need to relearn basic gardening and harvesting skills, widely forgotten for several generations now. As part of our family’s re-education, we watched Internet videos about how to harvest chard, kale and broccoli and were delighted to find that kale will continue growing late into the fall and broccoli will yield dual harvests in summer and fall. As I admire my backyard, I like to imagine the bounty a community garden across several adjoining neighborhood lots could yield if we made it a priority.

Shiva discussed Aristotle’s distinction between economia, which means the art of living, and chrematistics, the art of getting rich or making money and accumulating wealth. It behooves us all to grow many gardens, each a natural seed sanctuary filled with promise for the coming season. Together they contribute to a healthier economy, better able to sustain life for many generations to come.

To our living and sustainable future, 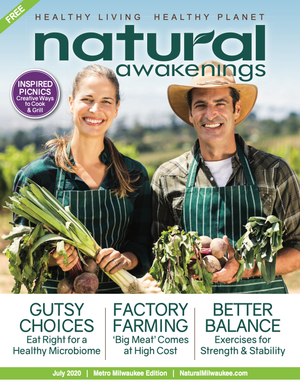